The new buzzword in the world of SEO is Google Passage Indexing (or passage ranking).

But what is it? That is the question that has been making the rounds recently because it was not all the way clear at the time of the announcement.

Google is working on understanding the “core idea” of content under each heading of a web page. This is being done to help users find direct answers to their queries. It will in turn help longer content pages get a snippet for relevant queries.

While it has been heavily reported that the Google passage-based indexing update is already live, the company’s search liaison Danny Sullivan refuted the claims in a Twitter post on December 22.

It was initially set to launch at the end of 2020 but has been delayed for one reason or another.

Here is what we know so far.

One thing that Google’s team has been bent on correcting is the update launch being mistakenly named Passage Indexing; a term that SEOs have run with since the announcement.

In a virtual conference with some leaders in SEO, Google’s Martin Splitt said that the new update should be more accurately called passage ranking as it has no impact on a site’s indexing.

This particular misnomer is noteworthy because your page first needs to be indexed before any passages qualify for a feature.

Additionally, there was quite a bit of confusion amongst webmasters as to whether Google will now be indexing paragraphs individually rather than an entire web-page. They will not.

So, if you read the title of this blog and thought that is the case; note that this change is rather a shift in how Google reads each passage in your long-form content and ranks it.

As you may well know by now, these are called Featured Snippets and came to exist thanks to the BERT update of 2018.

Since its launch, BERT went from covering 10% of queries in 2019 to now covering almost every English query.

The Passage Ranking update is also thought to be based on BERT’s natural language processing abilities.

It seems that the new update, which is set to launch in the early months of 2021, is a more advanced version of the AI that will seek to understand the relevance of each passage on a page.

As I mentioned in my blog on RankBrain, Google processes about 400 million search queries each day. An enormous 15% of these queries are new and thus difficult to return results for.

From what we know about the new update, it may just help class these unique queries, since it will look closely at individual sub-sections of an article that may be more relevant to the new queries than a whole page on the topic might.

How Does it Work?

You probably get the gist of the update by now – it’s to improve featured content.

But when asked if the passage indexing update is merely an improvement on featured snippets, Danny Sullivan refuted this.

Google has said that Featured Snippets were primarily developed to help with voice search queries by finding relevant pages first and then looking at passages in the document to answer the query.

On the other hand, passage ranking looks for the relevance of any passage on any website with a focus on answering specific queries.

How, then, is it different to featured snippets?

How Will the Google Passage Update Look?

In the example below given by Google on Twitter, there is a clear distinction in the results featured on “position zero”, before and after the update was applied: 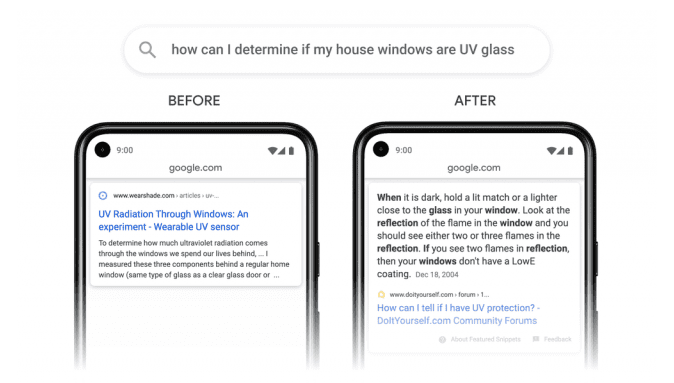 Still don’t see the difference? Allow me to elaborate.

In the first instance, the answer featured doesn’t answer the long-tail search term exactly how it is asked. It likely picked up familiar keywords and tried to give the user the most relevant answer.

However, it doesn’t answer exactly how to do so, but rather places fragments of the answer. Meaning the user would need to click through and hope they find their answer.

In the new and improved version, the passage featured speaks on steps to take to check for UV radiation.

The passage doesn’t specifically mention UV radiation, yet the AI was able to determine that THAT is what the searcher was looking to find out.

While the first result was picked up from a webpage, the new answer comes from a forum where there are likely several answers. It was able to then read each individual passage and pick the most relevant one.

What Does This Mean for SEO?

Upon its launch, this update will cover 7% of all queries. So, what does that mean for your webpage?

On the upside, it means your longer page could receive a passage feature. Even if the whole page is not specifically answering a single query.

If you haven’t been already, it’s best to focus on writing good content that answers queries as directly as possible.

According to Martin Splitt, content creators needn’t make any changes to their content. There is no special mark-up to add that could see your content featured.

“It’s just us getting better at more granularly understanding the content of a page, and being able to score different parts of a page independently,” he adds.

If you’ve been in SEO long enough, you know to take this advice with a grain of salt. Never stop testing and trying to improve your content.