The Google Ranking Factors are determined by the engine’s algorithm which takes over 200 signals into consideration when ranking webpages. While Google’s mission is to provide the most relevant and reliable information available. Nothing stays the same, each year and sometimes month the new nuances are added to its ranking algorithm.

Unfortunately, the search engine does not list the factors anywhere and nobody really knows. With that said, Search Engine Journal went on a quest to uncover the truth. The team looked at 88 signals and tried to determine if these are Google ranking factors or not.

The team at SEJ spent more than 200 hours researching and compiling the findings. They spent these many hours to ensure that they avoid any guessing and speculation. The researchers developed a Ranking Factor Meter (RFM) to validate the legitimacy of the signal/ranking factor. 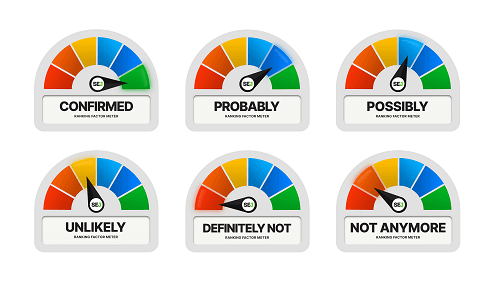 What Does the Ranking Factors Meter Entail?

Confirmed: There is direct confirmation from Google, or someone who works at Google, that this signal is used for ranking.

Probably: There is a strong amount of evidence (e.g., public comments, patents, third-party data) indicating Google uses this ranking signal, though neither Google, nor a representative of Google, has officially confirmed it.

Possibly: There is some evidence that Google is using this signal, but no official confirmation from a Google rep and/or conflicting/unreliable data.

Unlikely: This signal hasn’t been ruled out completely, but there is little/no evidence that Google is using, or has used it, to rank results.

Not Anymore: In the past, Google used to use this as a ranking signal but is now outdated or no longer used by the search engine.

Definitely Not: This means that this factor is a ridiculous idea and there is zero evidence or additionally even direct refutation by the search engine that this signal is used for ranking.

RankBrain, the Google AI-powered algorithm is according to the study one of the most important deciding factors when deciding if a particular web page ends up in the search results. This algorithm examines user activity with search listings in a bid to quantify their quality and relevance.

So, basically, if a user clicks on a page that provides useful information and stays on the page for a number of minutes, this is mostly due to result in a higher ranking compared to thin content that’s of no use or has a high bounce rate.

Another factor is bounce rate. Although not everyone in SEO agrees that bounce rate matters, the SEJ research found that Google actually considers it an important factor. Afterall, we all know that pages with a high bounce rate probably aren’t a great result for that keyword.

The research also found that pages that support structured data may rank higher compared to pages that don’t have it. This may be a direct boost or the fact that pages with schema have a higher SERP CTR.

Backlinks another signal that Google uses to rank your site. Google launched its game-changing PageRank algorithm update back in 1996, this indicated that the number and quality of links to a page would be a strong indicator of the quality of a web page, and more than two decades later, it still is.

Another Google ranking factor to consider is the way you structure your page URLs has some impact on your search engine ranking, the research found. A jumbled URL that has a lot of mixed characters doesn’t do a great job of helping search engines know more about the page.

On the other hand, a URL that follows a simple structure, is concise, and incorporates the target keyword — now that’s an SEO-friendly URL.