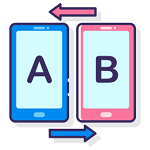 A/B testing seems to be a buzzword in the marketing realm these days with top companies, such as Netflix, Microsoft and Amazon to name a few, using the technique to improve conversion rates. Thus, it is unsurprising that it has crept into the minds of so many SEO specialists who seek to find out whether it may be effective in improving their Google rankings in addition to their conversion rate.  After all, who wouldn’t be interested in a technique that seemingly allows webmasters to test the impact of their changes before implementing them permanently.

If you’re looking to find out more about A/B testing, you have come to the right place. Below we explain what A/B testing is, list the types of variable testing available for websites, explain why A/B testing is important and how you can perform tests on your site for free with Google Optimize. So, carry on reading and begin testing all sorts of wonderful theories to see whether it will improve your conversion rate.

What is A/B Testing?

A/B testing (sometimes referred to as split-run testing or bucket tests) is an experiment where a subject’s response to a single variable being displayed in two different ways (A and B) is being tested. In plain English and in a content marketing context, this means that we are running a test to try and measure whether people like a product being presented in one way or the other.

If you are still a little confused about the concept, perhaps a concrete example will clear things up. Netflix is pretty famous for using A/B testing to increase both sign ups and keep you on their platform. For example, each series has got multiple thumbnails. Some will focus on faces whereas others will focus on landscapes.

If the algorithm detects that you are more prone to clicking on thumbnails featuring faces or people on them, they will alter your homepage to feature more such thumbnails to get you to click on more options.

Here is an example of two different user profiles on Netflix. Pay attention to the thumbnails (especially, the one for the series You.)

Here are the most popular types of A/B testing marketing techniques:

Why Use A/B Testing?

There are so many reasons to have a look at A/B testing when trying to improve your content. Some of the most important include the following:

How Can I Perform A/B Tests? – A/B Testing Tools

As previously mentioned, Google already has a platform that will allow you to perform A/B tests: Google Optimize. Webmasters just need to login to their Google Account that is attached to their Search Console and Analytics profiles and they will be able to track the performance of both variations of the page.

It is important to consider proposed changes before you make them. You don’t want to make changes randomly in the hopes that something works. Rather, research is required to ensure that you are making changes that could have a potential impact in conversions, clicks, etc.

What Can I Test?

A/B testing does not have to involve changing your entire interface. Many webmasters use the method to test a variety of elements on their site to increase CTR and conversions. Examples include:

How Long Should I Run My A/B Test?

Google recommends that users wait about two weeks so that tests can account for cyclical web traffic and that the tested page has long enough to compete against the control.

Can A/B Testing Hurt My Rankings?

Yes, but not in a bad way and not due to performing a test (if you do it properly).  For example, if you test a new meta title and see that it is leading to more clicks than the old one, you are going to want to change your title to the option that gets more clicks.

As pretty much as every experienced webmaster knows, when you change content there is a possibility that this change will see your site drop in positions. In these situations, you need to ask yourself what is more important – the ranks or the clicks?

With regards to indexing and how to format test pages, Google suggests that you do not cloak the page. Rather, you should use canonicals and 302 redirects on the test page. The 302 in particular tells the search engine that the page is temporary. SEO pundits suggest that you apply the noindex tag to the new page to avoid dropping in rankings due to keyword cannibalization or duplicate content issues.

A/B testing is a great way to test theories you may believe will improve your conversion rate in a safe environment. With tools such as Google Optimize, this marketing technique is seemingly made available to webmasters on the tightest of budgets. It is possible for A/B testing to hurt your site’s rankings should you implement changes. However, if said changes lead to a higher number of conversions, it could be argued that the drop may have been worth it.

Want to learn more about A/B Testing? Download our presentation!